The color coding is base on the home districts for freight cars, which were effective until 1980.

An adequate equipment to store and sort car cards is needed at each station and staging yard. This is the fact even if there is only one shipper at a siding.On the picture above you find the following: 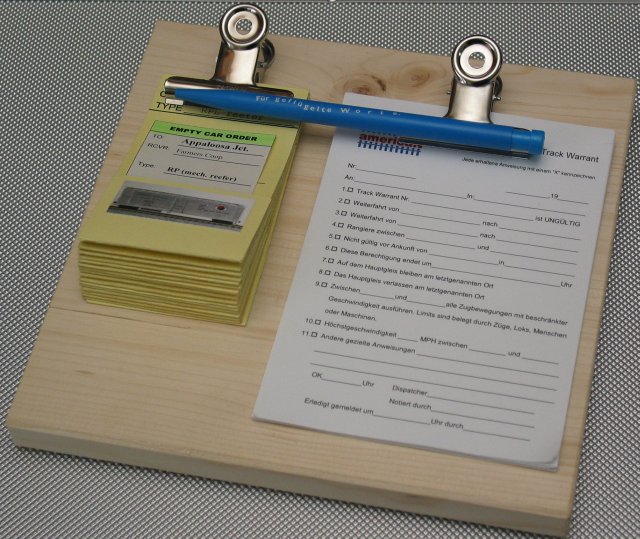 To transport the car cards and the track warrants, we have built these clipboards.

What about Waybills if you have active interchange?

The waybill system we are using at americaN will be the same if you have two or more Railroads on your layout.

The crew of Railroad Blue will collect the interchange cars at "XX", and reading the waybills this crew knows where to spot the cars.

How does a train crew know that a certain car should be interchanged at “XX”?

The conductor will get this information from the waybill:

It is the task of the conductors to know the layout and its stations, including interchange concept, before moving a train.It could be possible to write the interchange information on the waybill. But:

At the meeting of americaN (in June 2010) there will be the first active shipping of freight from shippers on the layout to consignees on the layout. The idea is to make extra waybills for this purpose.

The FREMO HO Southwest-Division (which is operating with modules, too)  is using the following system successfully: