TWC at the prototype

Up to now, in USA there are many railroad lines without any signaling. These lines are called dark territory, and there are some different ways to assure security. Since the invention of telegraphs, and until dependable radio transmission was developed in the seventies, the traffic in dark territory was dispatched by Time Table and Train Order.

After implementation of railroad radio, and after decline of passenger service, the traffic in not signaled areas changed to Track Warrant Control or Direct Traffic Control.Track Warrant Control (TWC in the following) seems to be the ideal way to allow flexible operations on americaN module arrangements.Before going into the details how TWC is adopted to americaN, we want to give you three sources for TWC:

To explain how we use TWC at americaN, we have published a short reference in German language. There you find a description

Radio communication -between dispatcher and train crews- and track warrant forms are the most important hardware to use TWC at a railroad model. At americaN, as train crews we always have an engineer, who often supported by a conductor.

To walk besides the train with track warrants and car cards, each train crew is using a conductor board. For communication, we use the private mobile radios (which can be used without license and without communication fees in Germany).

We tried out some brands, and now we use the comfortable ones Alan 443 with headsets Midland MA35-N. Both together we bought for around 67 EUR.

At real railroads, each track warrant is checked for safety reasons by a computer system before it is transmitted to a train crew. If the new track warrant would be in conflict with other track warrants still valid, a security check by the computer would detect it and would warn the dispatcher.At americaN, the dispatcher has no security assistance by a computer. Therefore, he himself has to make sure that the trains are running under safe conditions. A good working place for the dispatcher is needed. By the way: the dispatcher is sitting at a place where he cannot see the layout, and can only hear the train crews by radio. This adds a lot to the realistic atmosphere!The photo below was shot at the FREMO-meeting in Naumburg 2008. It shows the working table of the dispatcher. There is the schematic track plan penciled onto the magnet board. In front of the board are empty track warrants, on the paper to the right the engine numbers for each train are noted.On the right, you can see the graphical schedule, and above are the job descriptions.The job descriptions are telling the train crews what their job is, what they have to do with the train. For every train there is one job description for the crew, and one for the dispatcher. By the way, we do not use a clock in our system, but let the trains run according the schedule. The graphical schedule is for orientation only. The job descriptions are numbered, and the train crews are called according to the train numbers. 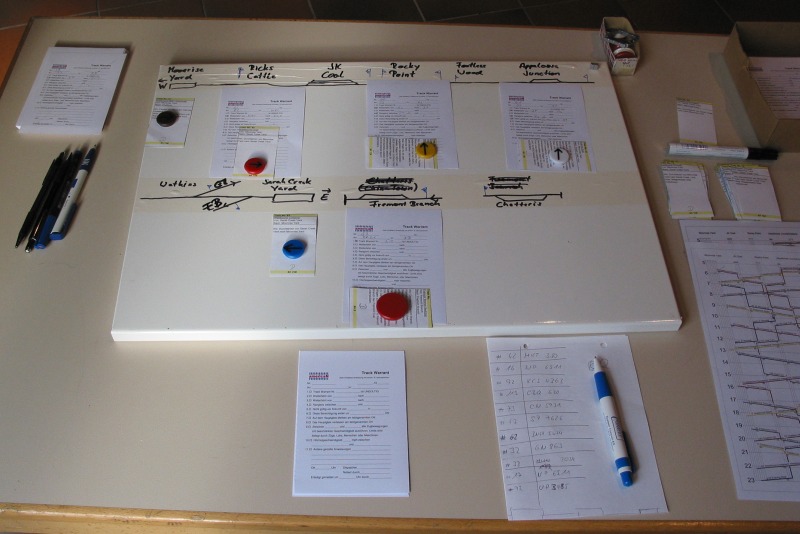 At the moment of the photo, the situation is the following:

The position on the magnet board tells the dispatcher the position and status of all trains on the arrangement.

If a new track warrant is issued, it will be fixed with the magnet at the new position, and the job description will be moved, too.

By this, the dispatcher can supervise all train movements in his division without much effort on writing and reading.

Michael Homberg has published his field report about dispatching, which he made with another method, here. 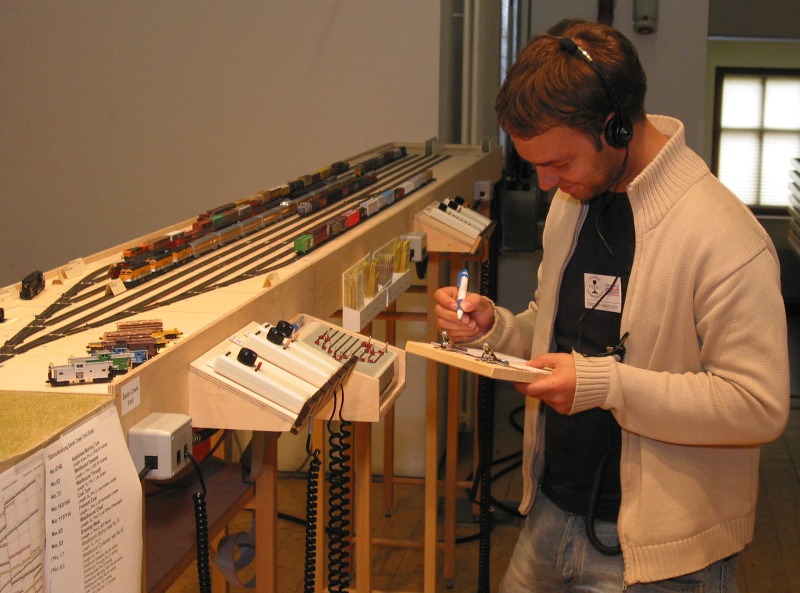 Stephan, who works both as engineer and conductor, is noting a track warrant. He will move the Ski Train of D&RGW from Sarah Creek Yard to the west.