Carsten S. Lundsten and I agreed to meet for al railfanning trip in København area, Denmark. This is where Carsten is living, so it was no question that we would get to the places where the action is.

On the other hand, Carsten has a model railroad in his basement, the Atchison, Topeka and Santa Fe (AT&SF) around Lamy NM.

And besides being a railroad engineer, he is owner and Managing Director of BLDX, a real railroad company with the services:

Three day for railfanning started early in the morning. The whole trip was by train, and in Bayreuth I entered a 612 diesel rail car heading to Nuremberg. The 612 was not allowed to tilt at the time. Delays were to be expected.

The delay was only some minutes, and in Nuremberg I got the connecting train to Hamburg:

The ICE was coming from Munich and went directly to Hamburg

at this moment running with 249 km/h. 250 km/h was the maximum on many parts between Würzburg and Hannover :-))

Hamburg Central is often crowded with trains. And in between, it takes a short breath

and after some minutes the trains are arriving everywhere

the short trains are coming and going from both sides, doubling the platforms

the Baureihe 605 (ICE TD, VT 605) is coming from København, and after a short stop this one will continue to Berlin

there is the symbol of DSB, the Danish railways, on the front

the 112 on its way to Ahrensburg

and double deck coaches to Rostock

I was standing behind the engineer of the ICE 35 from Hamburg to København while the train was approaching the Fehmarnsund bridge (well, not directly behind, but the ICE TD has a transparent glass between the engineer cabin and the passengers)

the Fehmarnsund bridge is used by train and cars

entering Puttgarden station. Some years ago here was heavy passenger and freight traffic, but now the freight trains are using the route over the bridges and tunnels in Denmark and Sweden.

plants are entering the freight tracks

we have been moving forward some meters, but the gate is still closed

and only a minute later they are coming

only three minutes later the ferry is empty, and we start moving

until the whole train is in the body of the ferry

all passengers have to leave the train, and go to deck, shops or restaurants

some stairs upwards, and I am on sundeck when the ferry is moving on Baltic Sea

looking back at Puttgarden ferry station

we have just left the port when the next ferry from Rødby, our destination, arrives

the ferries are moving in both directions. They are roll-on roll-off ferries which do not have to be turned.

Puttgarden harbor in the background

at Rødby the train is back on the ballasted tracks. It was getting dark, so I packed the camera away.

Some hours later I took the S train "C" from København to Herlev. Carsten picked me up at the station, and

a little later my camera got good light again.

The gauge of the railroad was N scale by now: Carsten shows me his model railroad in the basement, the Atchison, Topeka and Santa Fe (AT&SF)

the backdrop gives the feeling of wide distances. You have to look very carefully to see the end of the backdrop, which at the bottom is covered by a tree. Imagine: the backdrop is only 3 cm wide, painted blue, and you have the illusion of sky!

some areas are only a few cm wide, and the rest is illusion. From being there I can tell you: it works!

dry river, bridge and fences. Fences? Yes, you need a close look to see them...

fences keep the cows away from the tracks

the match of the colors of landscape and backdrop needed some testing, Carsten told me.

We hauled trains uphill eastwards, and added midtrain helpers from Aztec to Coyote. The lead engines were controlled by Carsten, I drove the midrain helpers, and I can tell you that it was fun and a lot of communication to pull the train uphill. It works very well. And we missed something: we did not take photos ;-)

Next morning, we went to Hoje Taastrup where two double track main lines meet to go to København. In Addition, the S line "B" starts and ends here.

The #287 was moving up and down a few times, while

the EN Euro Night from Amsterdam, Basel and München arrived on its trip to final destination København.

double deck coach from the side

ME engine leaving with great sound

these IC3 come as diesels and electro. This is a diesel...

these units can be coupled together to built long trains

From Hoje Taastrup we drove to Koge, to the shop of BLDX:

the MX ContecRail #1009 had been busy last night, and is waiting now in front of the BLDX shop. ContecRail is a partner company of BLDX

the MX is an American GE engine. AND details show: it is a Danish engine

the view out of the front window

all in reaching distance of the engineer.

On another track, outside the BLDX area...

are these old-timers, belonging to the local railroad club...

and a big vacuum cleaner, which can be used to suck holes into the ballast.

We left Koge and drove to the airport at Kastrup: At the DSB location, we found

the IC4 made by AnsaldoBreda.

We moved to the DSB's main shops at Otto Busses Vej in København  and...

and the BLDX MX #1019 in the great BLDX paint scheme

We headed on to find the other BLDX engines. We found the BLDX #1017 near Østerport, and...

BLDX #1018 was at Lersøen waiting besides a ballast work train 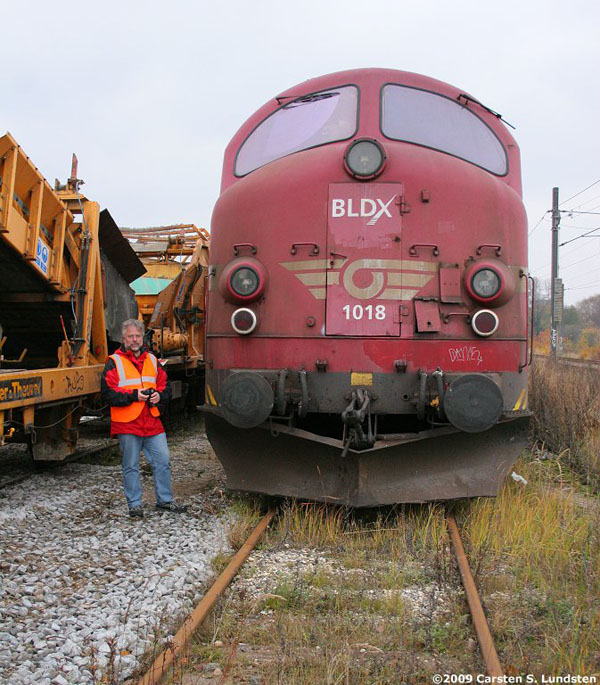 We had seen all three BLDX engines: what more could we expect?

We left the twelve inch to the foot (Carsten's joke) railroads and headed to smaller scales:

and met Flemming Ørneholm. He welcomed us and smiled while he showed us his present layout.

Maybe you have read about Flemming's former HO layouts? He published some articles in the American Model Railroader.

And an article about this new layout has just been sent to Model Railroader and will probably been published soon, too.

To avoid a conflict with the article do come, I will only give you some ideas what he did now:

This is the staging and fiddle yard.

Yes! It looks different to the typical plywood districts, doesn't it?

Does it look great? Yes. And how did he build this town? This is a secret until the article has been published.

On the track plan you see 5 different background colors.

These 5 areas are different "stage settings". "Stage setting", the term of theatre?

Yes. Flemming built his layout according to theatre principles. Each stage has its own setting, its own theme. You cannot see two stages at the same time (yes, you can, if you are standing in front of the room. But no one will do that. If you are there, you want to see it as close as possible. Therefore, you will be at one stage setting at a time).

Each stage is framed. It is lightened with light to see, and additional light effects. Flemming showed us the differences by switching the spotlights on and off. Yes: one sees the difference.

No one would be standing where I made this photo. But I want to show you the "stage settings" green on the left, dark blue in the middle, and light blue on the right (for colors see track plan above). You really have to move "in" the frame to see what is happening at dark blue. Flemming shaped a visitors mask for this, a tool like the radar engineers used to use to have a good look at low light.

The green stage is on the left, dark blue on the right, and the thing which looks like a TV is: the monitor of the staging yard, which is in the room nearby. You will use this tool if you want an actor to enter the stage.

Flemming added the elements of theatre stages settings. He has 6 of them in one layout (the pink element at the entrance has two stages: both are small, and both have big impact).

to give you an impression with the right lightning: this is a part of the red stage setting.

Below the light blue stage...

Flemming has his workbench.

And there is another "invention" of Flemming: the three sandbags he uses as tripod for his camera: by this he can take photos anywhere on his layout, for example at track level.

Thank you for sharing your ideas!

We left Flemming and headed to another layout...

to meet Jan Nielsen and his American HO layout:

"Just try it, you have to find out", he told me and handed me the throttle

Jan has double track at most places, but in the real world one tunnel would have been too expensive to make it double, and therefore he made it single track, too.

By this, you have a bottleneck, and it is fun to operate with two persons and two long trains at the same time.

Thank you, Jan, for letting me hauling those long coal trains!

This day passed by like an express train. Next morning I had to travel back home...

I took a hamster to København H, and boarded...

The ICE boarded the ferry at Rødby. We got strong wind, and the sundeck had to be kept closed.

The Baltic Sea showed us some waves...

splashing against the restaurant window...

where the wall calmed the sea

and the water was flat again.

Back on the Fehmarnsund bridge, and there was falling snow...

snow along the tracks, at 04th of November?

Deer could easily be seen in the high contrast

Thank you Carsten, for organizing, meeting Flemming and Jan, and :-))