Prototype orientated operations was new to Michael when he joined our group at the end of 2005. After two americaN operation weekends, he wrote this field report:

At americaN, we are simulating the operations of the real railroad. We are transporting goods from A to B, and the movement of the cars is determined by station data sheets and waybills. In contrast to European railroads where trains are controlled by railway control centers and signals, at americaN we follow the prototype and use Track Warrant Control. The person in charge of security and movement of trains is called dispatcher.When operating with Track Warrant Control, we have three jobs:

Sometimes the conductor is engineer, too. If we have enough persons attending a meeting, we prefer to have both roles.

What a dispatcher does?

At the meetings of americaN we use graphical time tables. The dispatcher makes sure that the trains are moving according the schedule, and that the movements are without accidents or friction. What is typical for single track arrangements, what we have at americaN?

Sometimes two trains are switching at one station, for example a local and a sweeper. That is big fun, as the two conductors have to coordinate on their own.

The conductor is responsible:

We have dispatched with some different methods, and all worked. The following method I have tried in March 2006 for the first time, at the Waiblingen meeting.

Important ideas I got by Dave Husman via the Operations Special Interest Group of NMRA (National Model Railroad Association), USA. My aim was to minimize my work as dispatcher, and having all the necessary details to know what is happening on the division. 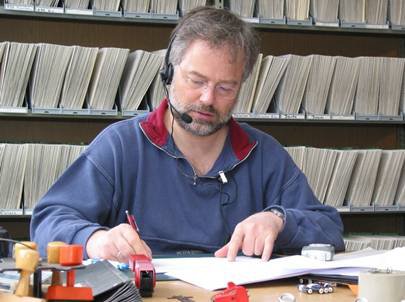 Dispatcher Michael H. in the office

Where to put the dispatcher’s office? At the beginning of operations by americaN, the dispatcher was working from the middle of the layout. And now, we prefer that the dispatcher is far away, that he does not see nor hear the train crews. The big advantage of a separate office is that this adds the reality to this job. At the prototype, the dispatcher sometimes is many hundred miles away from the train.

and the following documents:

This is the track plan for this report. Clockwise, which is from east to west:

Schedule for Waiblingen 2006. The trains are run in the sequence given by the schedule. Please consider, no clock is used. This was done to eliminate the pressure, as we always make new track plans for each meeting, and therefore we do not know exactly how much time every task will take. By the way: sometimes extras -extras are trains which are not listed in the schedule- are running, for example coal trains.

Above: job descriptions. They are describing the job for each train. 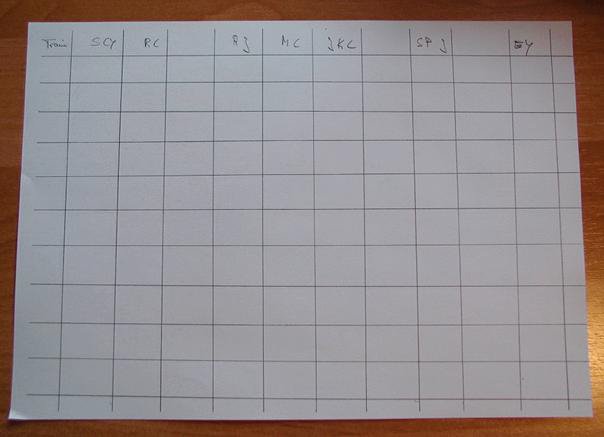 A chart was quickly drawn with a pencil. The abbreviations explained above are listed from west to east.

The chain of dispatching:

The dispatcher makes the decision which train shall move from A to B, then he dictates a track warrant to the train crew, and parallel he marks the train movement in the spreadsheet:

If there is a danger of collision, the conductor should be able to identify it by looking at the graphical chart. A danger of collision is present if more than one not-orange line is at one column. If so, specific safety measures have to be taken. This can be done by yard limits: this is done at Appaloosa Junction. Or, this can be done by commands at the track warrants.

At the moment of the dispatching chart above, the following track warrants are valid: 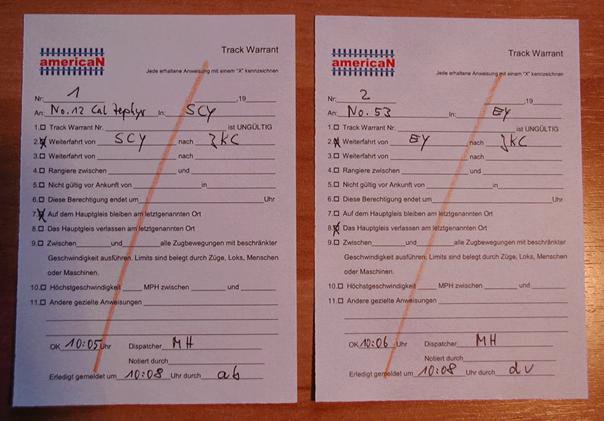 Track Warrants #1 and #2 are completed, and crossed out in orange color. 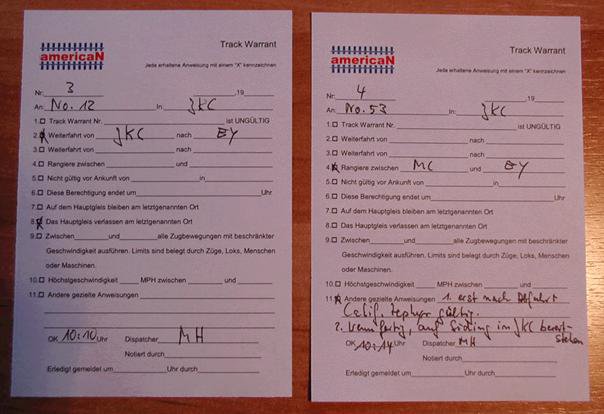 Dispatcher: is it a dream job, boring or a nightmare?

The opinions are varied. It is good to have more than one person in the tea who likes to dispatch.

I like the tension to control trains which are far away, which I cannot see. On the other hand, I want to move trains in another session. I like to get both in a good mix.

Some people in our group have never dispatched so far. They want to be at the trains. Don’t they have the heart to do it? This could change if they read this report. Let’s see what happens at the next meeting!